Innovative LED luminaires at the Siemens headquarters in Munich, Germany

The completely redesigned Siemens headquarters in Munich offer an impressive future-oriented and variable space and usage concept. The high requirements placed on lighting in terms of energy efficiency and flexibility have been perfectly met by innovative SITECO lighting solutions. State-of-the-art LED luminaires and LED drivers provide ideal lighting conditions in all parts of the building, with individual lighting concepts promoting the well-being of the approximately 1,200 employees. The new Siemens headquarters in Munich provide an inspiring working environment for around 1,200 employees in a floor area of 45,000 square meters. The new office architectures and furnishings are based on modern forms of working and organization – for example with open-plan offices including think tanks, phone boxes and lounges, and numerous communication zones. Here lighting plays a fundamental role in creating an atmosphere in which all employees can be creative and productive based on their individual requirements.

High-quality, and in some cases customized LED solutions are used almost everywhere. All LED luminaires are equipped with DALI drivers for maximum energy savings and can be controlled and monitored via the central building control system. With the help of daylight and presence sensors in the building, the lights can be used and dimmed based on demand, thereby saving even more energy. Approximately 3,500 units of a customer-specific version of the SITECO Arktika LED luminaire were used as semi-recessed luminaires in different lengths throughout the offices. With their design and high level of visual comfort, the luminaires are tailored to modern workplace requirements and help provide an open transparent effect in the room. Special honeycomb reflector technology ensures highly efficient light distribution with minimum glare. The opal light emitted from the sides also indirectly contributes to making the ceiling brighter.

In the meeting rooms at the historic Palais Ludwig Ferdinand, in all traffic zones, in the sanitation facilities and in other ancillary rooms, approximately 3,000 Siteco Lunis 2 LED downlights provide powerful illumination and a clear transparent atmosphere. In larger meeting rooms and in the traffic zones the LED downlights are supported by the SITECO Tecario LED light line system – with a total length of almost 200 meters. Its special aesthetic design goes very well with the attractive interior architecture of the new facilities. The modular options allow for a high degree of flexibility in lighting design. SITECO LINEARlight Flex modules also create special visual accents. The flexible LED modules are used as indirect lighting in the coves surrounding the central meeting rooms at the Palais Ludwig Ferdinand. 1,500 Monsun 2 damp-proof luminaires, which provide great visibility in the underground car park at Siemens headquarters, round off the lighting concept. 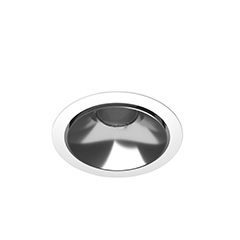