New Light for the City of Bensheim, Germany

Public lighting is an important and necessary part of the infrastructure and also a part of the energy/ecological balance. It is a matter of combining quality of light and energy efficiency. LED solutions are efficient, flexible and innovative, and provide new perspectives in all areas – energy consumption, maintenance effort, quality of light, control and design.

The Southern Hessian town of Bensheim in Germany puts its trust in tradition but simultaneously targets technological progress – with LED modules for the BELL luminaire range and the high-efficiency LED road luminaires of the Streetlight 10 LED family.

More than 3,400 light points were upgraded to LED technology in the past two years by SITECO and the energy provider GGEW AG. Approximately 3,000 Streetlight 10 LED luminaires were installed to illuminate the main roads and ancillary roads, and existing Bell-type luminaires in the town centre were upgraded to LED technology. In this way, the town cuts its power overheads by around 40% compared to the old system – the quality of light is also significantly improved.

All three Streetlight 10 LED construction sizes were used in Bensheim according to the specific task and road type. The Micro and Mini versions with 4000 Kelvin light colour were installed in the residential areas, providing optimum light guidance onto streets and paths. An extremely wide light distribution optic was specified due to the often wide mast spacing. Main thoroughfares such as the Berlin Ring and roundabouts are illuminated by the midi, the largest construction size.

The town wished to maintain the familiar urban appearance in the urban centre and pedestrian zone, meaning that in excess of 400 existing Bell-type luminaires with their traditional design were kept and merely upgraded to innovative LED technology. Only a few flicks of the wrist were needed to replace the gear tray (with lamp and ECG) with efficient LED modules. Regular relamping as with conventional lamps is no longer necessary due to the long service life of the LED modules. Compared to the sodium technology used previously, the LED solution ensures improved colour rendering and a better quality of light. The warm white 3000 Kelvin light colour specified for the town centre and pedestrian zone provides a pleasant light ambience, and is very popular with residents. 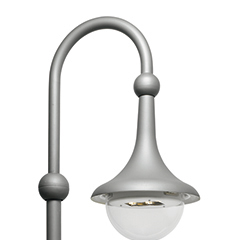